The Tri Leisure Centre is a destination and focal point in the Spruce Grove Community.  It was built through the commitment of dozens of volunteers and all three local municipalities.  Mike campaigned hard as the representative for the City of Spruce Grove and formed a strong bond with the committee representatives from the other 2 municipailities.  The end result was a positive plebiscite vote from all three municipalities (a miracle vote, because cooperation from 3 separate municipalities was simply unheard-of).  Many folks contributed and built the centre, but Mike's kids call it "The house that Dad built". 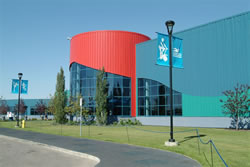